Written by Daymond Duck – Concerning the coming world government: the Bible teaches that it will be led by a blasphemous Satan worshipper (Rev. 13:4-7).

Klaus Schwab, head of the World Economic Forum (WEF), relies on a gay atheist advisor named Yuval Noah Harari, who, in recent weeks, blasphemed God by saying, “Jesus rising from the dead and being the Son of God is fake news.”

On Aug. 12, 2022, it was reported that he said the world does not need most of its current population (he said most human beings are useless).

On Aug. 18, 2022, it was reported that this blasphemer said, “We don’t need some God in the clouds handing down tablets” (the Ten Commandments) because we’ve created our own cloud (the Internet cloud) and our own tablets (computers).

On Aug. 18, 2022, one writer opined (based on Harari’s writings in 2018) that the blasphemous Harari believes, “There is no truth, only power” (according to the Bible, Jesus is truth, the Scriptures are truth, etc.), and he said, “Humans prefer power to truth.”

I am not Harari’s judge, but world leaders appear to be getting advice from the pits of Hell as they structure their temporary New World Order (sadly, most of the church and media remain lukewarm or silent, and many of America’s leaders, including the Pres. of the U.S., support the coming satanic New World Order).

Here are recent current events that seem to indicate that the New World Order will soon take over this world.

One, concerning the Battle of Gog and Magog: on Aug. 17, 2022, Israel and Turkey announced that they will return to full diplomatic relations.

Some have asked me what this means. I don’t think it means very much; Erdogan cannot be trusted. He will abandon his agreement and join Russia, Iran, etc., when God decides to drag them onto the mountains of Israel. He is not in control. God is in control.

Two, concerning Covid: on Aug. 17, 2022, the head of the Center for Disease Control and Prevention (CDC) acknowledged that the agency made major mistakes in its handling of Covid, and as a result, the CDC will be overhauled.

There is no question that the CDC needs to be overhauled (their major mistakes have led to adverse reactions to jabs, including the death of some people, skepticism about the veracity of the CDC, skepticism about the value of wearing a mask, people losing their jobs, people not being allowed to buy drugs that work such as Ivermectin, etc.). But government agencies don’t usually do a good job of overhauling themselves, and the people responsible for these major mistakes (the head of the CDC and others) may need to be replaced.

(More: On Aug. 19, 2022, Ben Shapiro (Daily Wire Editor Emeritus) warned that the CDC is actually seeking to increase its power and control over people.)

Four, concerning the coming of Messiah: on Aug. 19, 2022, the speaker on a prophecy program said that an Israeli rabbi is saying Messiah will return after Rosh Hashanah this year (Sept. 25, 2022). I hope the rabbi is right, but he is speculating, and there have been a lot of wrong speculators through the years.

Keep in mind what the great Ed Hindson used to say:

When He comes, this Rosh Hashanah or whenever, we definitely need to be ready.

Five, concerning the deceit, persecution, censorship, and famine: Aug. 15, 2022, was the one-year anniversary of Pres. Biden’s withdrawal of American troops from Afghanistan, an event that Pres. Biden said went off “as designed” even though 13 U.S. service members were killed and billions of dollars of weapons were abandoned.

According to The Washington Free Beacon, in the 12 months since America’s “designed” withdrawal:

The situation is growing worse, and the U.S. will not be exempt forever.

For the time being, California, Colorado, Utah, and Wyoming will not be cut.

Arizona believes the White House is treating that state unfairly. That appears to be true, but regardless of how the water is divided, it is a fact that a severe drought is threatening 40 million people with the loss of their water and electricity.

God told King Solomon, “If I shut up heaven that there be no rain, or if I command the locusts to devour the land, or if I send pestilence among my people; If my people, which are called by my name, shall humble themselves, and pray, and seek my face, and turn from their wicked ways; then will I hear from heaven, and will forgive their sin, and will heal their land” (II Chron. 7:13-14).

Eight, concerning threats to America: on Aug. 22, 2022, Tulsi Gabbard, former Rep. from Hawaii, said, “The greatest threat to our democracy is not Trump voters or parents protesting at school board meetings, but the permanent Washington elite which has weaponized the govt and teamed up with corporate media to intimidate and silence those who dare to disagree with them.”

Many prophecy teachers call the “permanent Washington elite” that Gabbard was referring to “the shadow government” because they influence America’s government and are working to surrender America’s sovereignty to a world government.

A recent poll found that 74% of those polled think America is going in the wrong direction. 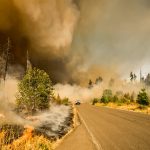