Written by Daymond Duck – This article is about what is shaping up now, not what is coming many years down the road.

Wars and rumors of wars, a global economic collapse, hyperinflation, famine, pestilence, the decline of America, etc., are shaping up now.

Here are some examples that recently made the news.

One, concerning the decline of America and the coming Tribulation Period (God’s judgment of the nations): on Apr. 22, 2022, Canada Free Press posted an excellent article by Rev. Michael Bresciani titled “No, It’s Not the Economy Stupid—It’s the Raging Perversion, Moral Depravity, and Transgender Mutilation of Our Own Children.”

Bresciani (editor of new.americanprophet.org) notes that God promised to bless nations that obey Him and to curse nations that disobey Him (Deut. 28, for example).

Bresciani points out that polling companies often use a list of 8 concerns that they ask people about (the economy, immigration, the war in Ukraine, health care, food and fuel shortages, education, environment, and politics).

He notes that these things would be last on God’s list, and there is nothing on the list about things that are important to God (morality, etc.).

Bresciani rightly believes that most people are ignoring the Scriptures and God’s desires for humanity (love Him; love Jesus, love others; pray; etc.).

The idea that God would intervene and judge the nations is foreign to them.

Two, concerning perilous times: on Apr. 20, 2022, Brighteon reported that shipments of anti-tank weapons, ammunition, artillery shells, drones, vehicles, etc., to Ukraine are rapidly depleting U.S. stockpiles, and it will take a long time to restock these items due to the shipping crisis, difficulty of getting parts, etc.

(Writer’s opinion: Perhaps Biden should ask the Taliban to ship the billions of dollars of weapons he left in Afghanistan to the U.S.)

Three, concerning a global economic collapse and famine: on Apr. 21, 2022, David Malpass, Pres. of the World Bank, said the world is facing a human catastrophe.

This may relate to something Jesus said about the end of the age, “There shall be signs in the sun, and in the moon, and in the stars; and upon the earth distress of nations, with perplexity; the sea and the waves roaring” (Luke 21:25).

There are at least two different interpretations of this verse: (1) The seas and the waves roaring are hurricanes, etc., and (2) The sea refers to the “sea of humanity,” and the roaring refers to civil unrest (Rev. 13:1).

It is interesting, considering all the other signs and their convergence, that a global organization is expressing concern over civil unrest caused by food shortages.

Five, concerning the supply chain crisis: on Apr. 21, 2022, Pastor Tom Hughes showed part of a Monkey Werx video that shows hundreds of oil tankers and cargo ships off the coast of Shanghai that are sitting idle and waiting to be loaded.

It is the opinion of Monkey Werx (not a prediction) that the shortages could trigger unrest and possibly the cancellation of the upcoming election.

I am not questioning Monkey Werx, and I can’t predict what will happen, but:

We can only speculate about what they will do, but the Bible teaches that world government and famine are coming, and nothing should surprise us.

Six, concerning pestilence and the death of multitudes during the Tribulation Period: on Apr. 22, 2022, it was reported that:

Florida passed a law to stop the teaching of sexual subjects in kindergarten through grade three.

They accused the state of Florida of discriminating against gays.

On Apr. 22, 2022, Gov. DeSantis responded by signing a bill that strips six districts in the state of their self-governing status and taxing powers.

This is the point: Teaching the LGBTQ+ agenda in school is part of the UN “Transforming our World: the 2030 Agenda for Sustainable Development” goals.

It is part of an effort to brainwash children into supporting the globalist agenda, and an effort to reduce the population of the earth.

(Note: Concerning a reduction in the population of the earth: Elon Musk recently expressed his opinion that “Earth could maintain a population many times the current level.” He called the UN population estimates “ridiculous.”)

Eight, concerning the decline of America: on Apr. 20, 2022, Franklin Graham said, “I believe God is going to judge America at some point. He has given us so much, and we’re so wasteful and so disobedient and so wicked in what we’re doing as a nation.”

Graham urged U.S. citizens to turn back to God as a nation; he urged Christians to run for school boards, take control of their communities, and pray.

Graham said (and I agree) that God is America’s only hope.

Nine, concerning the Battle of Gog and Magog: on Apr. 18, 2022, Russian Pres. Putin spoke to PA Chairman Abbas by phone, condemned Israel’s response to Muslim riots on the Temple Mount, and pledged Russia’s support for the PA cause.

On Apr. 21, 2022, Ismail Haniyeh, head of the Hamas terrorist group, called a Russian official, thanked Russia for Putin’s response, and asked that Russia take a central “role in curbing this (Israel’s) aggression.”

Ten, concerning the Jews returning to the Promised Land at the end of the age: God said,

“Behold, I will bring them from the north country, and gather them from the coasts of the earth, and with them the blind and the lame, the woman with child and her that travaileth with child together: a great company shall return thither. They shall come with weeping, and with supplications will I lead them: I will cause them to walk by the rivers of waters in a straight way, wherein they shall not stumble: for I am a father to Israel, and Ephraim is my firstborn. Hear the word of the LORD, O ye nations, and declare it in the isles afar off, and say, He that scattered Israel will gather him, and keep him, as a shepherd doth his flock. For the LORD hath redeemed Jacob, and ransomed him from the hand of him that was stronger than he” (Jer. 31:8-11).

On Apr. 23, 2022, I received an e-mail from a pastor who said, “I was watching the news about 2 weeks ago when they were highlighting the mass number of Jews (about 10,000) who were making their way to Poland (from Ukraine) to board planes for Israel. That same night I was reading Jeremiah 31:8-11, and I KNEW that what I had watched that evening was a fulfillment of Bible prophecy. What was so amazing was how these verses describe what I was watching as they came weeping, with the lame and the blind, with the women with their children and those who were pregnant with child. We are indeed living in the days of His return.”

Eleven, concerning corruption and deceit: on Apr. 25, 2022, it was reported that White House logs show that one of Hunter Biden’s business associates visited Joe Biden at the White House when he was Vice Pres. at least 19 times, and yet, Joe Biden claims that he had nothing to do with Hunter’s businesses.

There seems to be no question that some of Hunter’s associates were getting access to his dad, Hunter was raking in millions of dollars, and money was flowing back and forth between Hunter and Joe (It has been reported that Joe paid legal fees for Hunter; Hunter paid bills for Joe, Hunter came close to getting prosecuted for tax evasion, Joe has millions of dollars of unexplained income, etc.).

Twelve, concerning wars and rumors of wars: talk of WW III and Russia using nuclear weapons; the conflict between Russia and Ukraine appears to be spreading.

As the conflict drags on, food shortages, inflation, economic problems, etc., are worsening and moving the world closer to what could be the fulfillment of Tribulation-Period prophecies (removal of peace, famine, economic collapse, nuclear weapons, etc.).

Thirteen, concerning the Battle of Gog and Magog: on Apr. 26, 2022, White House Press Sec. Jen Psaki said Iran’s breakout time to nuclear weapons is “a few weeks or less” away.

Israeli leaders have constantly said they will not allow Iran to produce nuclear weapons.

This comes at the same time that Russia is upset with Israeli support for Ukraine.

Fourteen, concerning a peace treaty in the Middle East: on Apr. 6, 2022, Bahrain’s Sheikh Nahyan bin Mubarak Al Nahyan said, “We are determined. No one will stop us from building on the Abraham Accords. We are not worried about the enemies of peace, but we will fight against their efforts. We will fight anything which will harm our peace, our security, or interfere in what we do, or misrepresent us and distort our religion.”

“Our peace, our security” means “our peace and safety.”

More war is coming, but the Abraham Accords could ultimately lead to the confirmation of a covenant that will cause globalists to declare “peace and safety” and lead to the Tribulation Period. 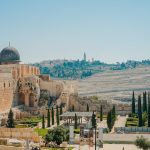 “The Arab Christian who saved Jews!” by Olivier MelickFeatured Articles

“Running Out of Time” by Daymond DuckFeatured Articles