In early October, a wave of high-energy radiation swept over Earth from a gamma-ray burst, one of the most singularly catastrophic and violent events the cosmos has to offer. Astronomers quickly determined its distance and found it was the closest such burst ever seen: a mere two billion light-years from Earth. 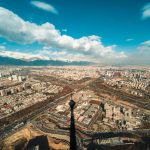