With all the bad things going on right now, Americans are looking at the economy, and they’re breathing a sigh of relief, thinking, “At least that’s going well.” And it is… for now. But even there, catastrophes are looming on the horizon. The Bible tells us about a series of major economic swings soon to come. And this week, the New York Post reported “The next crash will be worse than the great depression.” What’s coming? We’re about to find out…

The book of Revelation talks about two worldwide economic downturns that will follow the rise of Antichrist. One will almost destroy the poor and what will be left of the middle class, but it won’t touch the wealthy. The other will be total collapse hitting everyone from the richest to the poorest.

But Scripture gives us a hint of another economic crisis — this one to take place before the beginning of the Tribulation period. According to Revelation 13, when the Antichrist and False Prophet come to power, they will be given complete control of the global economy — more than anyone even dreamed of in the past. No one in the world will be able to buy or sell without the Antichrist’s mark.

What could possibly precipitate that? The world’s leaders will have to be so desperate that they will be willing to give the Antichrist complete control over the thing most leaders love best — money. A run-of-the-mill recession wouldn’t do that. It would take something HUGE. It seems logical that the Antichrist’s rise to worldwide power will be precipitated by a global economic meltdown. And it’s amazing how close we live to such a meltdown every day.

The news agency AFP recently reported, “The Bank of International Settlements [BIS] said Sunday “The global economy risked a ‘relapse’ of the crisis that rocked it a decade ago.” BIS economist Claudio Borio said, “There is little left in the medicine chest to nurse the patient back to health or care for him in case of a relapse.”

What does that mean? Basically, there’s no more bullets in the gun. There are no more solutions to the economy. Except… the Mark of the Beast.

In the past, nations lowered interest rates in times of economic distress. But today twenty-six nations have interest rates at zero or below — and they are not the ones you might expect. They include almost all the EU countries, including the economic powerhouses of Germany and France.

Zero interest was once an extreme measure used only in dire economic emergencies. Long term economic health and stability requires people to save money. But zero interest is designed to get people to borrow money — and not save it.

Japan, Denmark, Switzerland, Singapore, and Sweden have gone further than that.  They have negative interest rates.  That means the government penalizes savers.  With negative interest, instead of receiving interest on your savings, you would pay the bank for the privilege of storing your money there.  On the other hand, negative interest means they pay people to borrow money.  That’s crazy! I mean, literally crazy.

It is unsustainable! It means that even in these supposedly good economic times, these nations are desperate! And it has gone on for years. The world’s leaders are walking on a tightrope over hungry alligators, and it can’t last.

Peter Schiff, chief strategist for Euro Pacific Capital, said of the next downturn, “We won’t be able to call it a recession, it’s going to be worse than the Great Depression.”

Don’t put your trust in the world system. Put your trust in God. He promises to care for us even when the world falls apart. Remember the 23rd Psalm? “The Lord is my shepherd; I shall not want.” It’s still true, and will remain true. Just make sure that He is your shepherd. 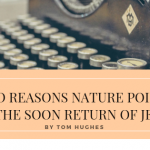 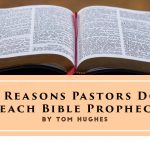