Hurricanes, floods, heatwaves, drought, summer snow storms… Over the last few months, the earth seems to have been going crazy. Is it related to Bible prophecy? Is it ever!

Why is nature in turmoil?

Reason number one — the earth is fallen. “Fallen” is a word that theologians use to describe the condition of humanity and nature after Adam and Eve sinned. The presence of sin changed everything. That’s when nature started going haywire. Romans 8:21 says, “For we know that the whole creation groans and labors with birth pangs together until now.”

Have you noticed, especially in the past few years, how often people refer to this world as “strange,” or “odd”? It’s because we all have an innate sense that the world is not as it should be — not as God made it. We know something is wrong. When our ancient forebears sinned, death, pain, disease, fear, and violence entered the world. And it doesn’t just affect humanity, but all of nature.

Reason Number Two — Jesus said it would be this way. We hear about hurricanes and typhoons in the pacific and the Atlantic. We hear about them in Hawaii, the Philippines, East Coast of the United States and more. We wake up to the news of fires in Europe and the Western United States. It sounds like everything is burning. Then we hear about droughts affecting many parts of the world while there are snowstorms in other places in the middle of summer! Add to that, there are reports of strange, loud noises coming out of nowhere and massive bird and fish deaths from red algae to reasons unknown. So what is going on?

As I already mentioned, the Bible tells us that “the whole creation groans and labors with birth pangs.” But birth pangs are not random. That word indicates that we are building toward an event — a birth. Labor pains come and go, but the contractions keep getting closer together and increasingly intense.

Jesus indicated that the world’s labor pains would grow in intensity and frequency as the time of His return came closer. In Matthew 24:7-8, Jesus told about that period. He said, “For nation will rise against nation, and kingdom against kingdom. And there will be famines, pestilences, and earthquakes in various places. All these are the beginning of sorrows.”

Sorrows is from the Greek word, “odin” [o-deen’]. It refers to birth pangs. In fact, most modern translations make that clear. Instead of “sorrows,” they say, “birth pangs.”

A few weeks ago, on my program ‘Prophecy Update‘, I showed how earthquakes have been increasing over the last 150 years. That increase has become even more dramatic this century. In the last few weeks, we have had an unusual series of quakes all over the world.

And because of Florence, and other weather events, we’re all thinking about hurricanes right now. But hurricane frequency has not risen in recent years. In fact, it’s gone down. Just when the global warming people told us there would be more monster storms, there are suddenly fewer. Even so, there has been no shortage of weird weather all over the planet. No shortage of record breaking fires. No shortage of volcanoes. No shortage of massive wildlife die-offs. And all these events fit the pattern laid out in the Bible of a planet groaning in travail as in childbirth.

Some try to write it off as the result of global warming. Is that what the problem is? I’m not a scientist nor do I claim to be, but along with earthquakes in various places and other cataclysmic events, Jesus said in Luke 21, that the sea and waves would be roaring. So much so that people would be so afraid that their hearts would fail them because of the fear and expectation of what is coming. And regardless of your beliefs on global warming, global warming certainly has added to that fear of what is coming. People are afraid. But you don’t have to be, if you have personal relationship with our Savior, Jesus Christ. 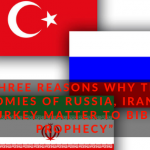 “Three Reasons Why the Economies of Russia, Iran, and Turkey Matter to Bible Prophecy” by Pastor Tom HughesFeatured Articles 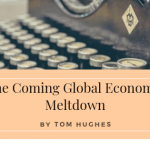